Those who cannot, will be destroyed on the lathe of heaven

Lathe of Heaven sounds religious doesn't it?  And it is, sort of.  Vaguely.  Well, almost entirely unlike religion as it turns out.  To explain...

A favourite novel of mine is The Lathe of Heaven, by Ursula Le Guin.  While writing the book, she was apparently very taken by some Taoist verses by Chuang Tse XXIII, which she used here and there in the story.  The book title is from one in particular:

' To let understanding stop at what cannot be understood is a high attainment.  Those who cannot do it will be destroyed on the lathe of heaven.'

Years after the book was published, Le Guin discovered that this is a terrible translation of the original writing, but it was way too late to do anything about it.  She still liked the sentiment though, and so do I.  I take it to mean something like, 'To know that something is unknowable, but still struggle to understand it, is a path to madness.'

So why did I call this project Lathe of Heaven?  I'm not letting on, but if you think about it hard enough, perhaps one day you will understand.

By the way, here's the music. 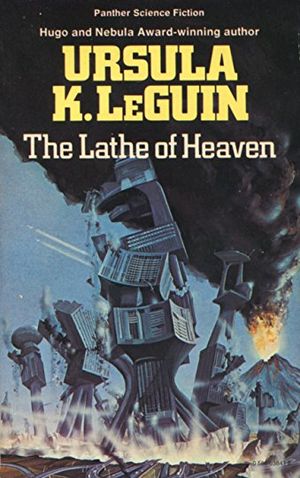